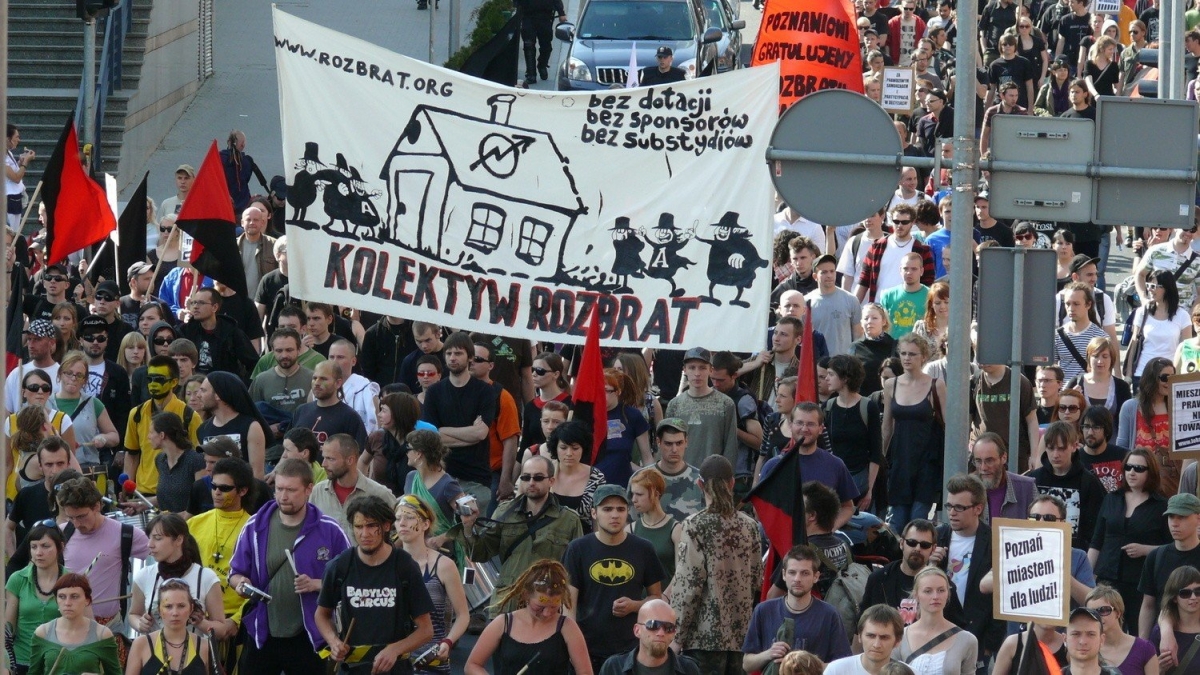 In October, Rozbrat squat is celebrating its 25th birthday, but its future is uncertain. A bailiff is preparing to auction off the plot, which we occupy. We won’t give it up without a fight!

Several years ago, Rozbrat filed a case in court to secure rights to the land we have been occupying based on adverse possession. The case remains open. Despite that, on May 15, 2019, the bailiff set an estimated value of the land we occupy, which opens the way to an auction and a possible forced eviction of Rozbrat. The date of the auction has not been announced yet, but that can happen any time.

The history of the land is complicated: it was nationalized in 1948, but after the transition to capitalism it was taken over by a private company as part of a doubtful reprivatisation. That company took out high loans and went bankrupt. The bank sold the loan to a debt trading company who is now demanding that the bailiff sell the land. The value of the land was estimated at 6 million PLN (1.4 million euros).

The mayor of Poznan has declared that no tools are available to him that could force the bank to relinquish its claim to the plot and let the anarchists maintain possession of the land. But we know that the state and local governments have grounds for defending the social ownership of the property. They are simply refusing to make use of this right and stop the land speculation. The bailiff, real estate speculators and their political allies have once again taken legal steps to get rid of us.

It is our conviction that after 25 years this area belongs to the Rozbrat community and needs to stay a collective property of the movement. We are not going to give it up without a fight. Rozbrat has countless times proved to serve the public interest, in contrast to the authorities, which represent the private interests of real estate developers.

Over the past 25 years, thousands of events have been organized at Rozbrat: concerts, exhibitions, theater plays, lectures, seminars and workshops. Rozbrat has housed many grassroots initiatives: the anarchist library and publishing house, the free bicycle workshop, various self-education initiatives, the printing workshop, a sports club, the kitchen for Food not Bombs, and a rehearsal space for musicians, among others.

Rozbrat has also been home to several generations of activists who have played critical roles during many important social mobilizations and debates on social issues. Activists from Rozbrat and the Poznan Anarchist Federation have actively defended the most excluded inhabitants of our city. They have supported and initiated dozens of labor, tenant and environmental protests. It was we who co-founded the Wielkopolskie Stowarzyszenie Lokatorów (the regional tenants’ association). It was we who brought the issue of illegal evictions to public light by organizing eviction blockades, making it impossible to throw sick, often disabled people, seniors and parents with children out onto the street. It was at Rozbrat that 15 years ago, the first meetings of the grassroots workers’ union Inicjatywa Pracownicza (IP) were held, attended by the legendary labor organizer Marcel Szary. Rozbrat has also been the starting point of countless demonstrations in defense of parks and green areas in our city.

We have provided organizational, legal, and moral support to thousands of victims of capitalism and of the state, and we have supported other independent groups in Poland. We are building a movement that relies on solidarity and mutual help instead of a rat race. We have organized hundreds of rallies and demonstrations decrying contempt for people with a lower material status, a different skin color or different views. This place has also become a temporary and permanent shelter for many homeless people.