Solidarity with squatters from Holland

Solidarity with squatters from Holland

On 27.11.09 at 1 p.m.  around fifteen people, including members of Anarchist Federation and Rozbrat squat collective, gathered under Honorary Consulate of the Netherlands in Poznan to protest against anti-squatters bill according to which from 1st of January 2010 squatting in Holland would be a crime. Consul accepted our statement, the content of which is published below. The aim of the picket was to show international solidarity to Dutch squatters, that soon may be defined by law as a criminals. Similar action is to be held in Gdansk and in many other European cities.

Dział: News in english
SOLIDARITY IS A CRIME THAT WE WILL NEVER STOP COMMITING!

STATEMENT
We, squatters and anarchists of Poznan, are deeply concerned with the anti-squatters bill. Squatters movement in The Netherlands is wide-known and accepted by the society. It has several decades of tradition and expanded its own infrastructure and counterculture, which  provides shelter and enables tens of thousands people to freely develop themselves. Authorities want to introduce anti-squatters bill virtually without any public debate, what make us even more outrageous.  We notice that the proposed act is a part of wide, European plan of making society dependant of big-business. Privatization of higher education, health service and other public services so in this case, attempts to limit the choice of residence by forcing the expensive rent. Almost every week we are noticed with information from all-over Europe about evicting squats, often lasting for several decades and gathering hundreds of people around them. In every state the governments want the same- pacification of grassroots movements that refuse their “freedom” and “democracy”.

If the Dutch government adopts this bill, from 1.01.2009 the act of squatting a house will lead to imprisonment. Is it rational to regard satisfying one of the basic human needs that is a shelter as a crime? We consider, that Dutch politicians has only one aim- identify libertarians with criminals,  thus justifying imprisonment of people who loudly talk about infirmities of capitalism.  The authorities want to steal places in which the critical and independent thought is created, places that allow to prepare actions against social injustice, racism, propaganda of consumption and all other forms of domination.

The anti-squatters bill will hit not only the squatters movement itself, but also the poorest class, workers, immigrants, and everyone who is forced to squat  due to lack of money for high rent. In the name of the media model of law-abiding citizen who works eight hours to pay half of his salary to a landlord or a bank that gave him a loan they will be pushed to the role of criminals and idlers that steal someone’s house.

We do not agree with the proposed reform, as we are threatened with eviction ourselves, although we have run our social and cultural centre for over fifteen years without taking a buck from the authorities. We know what thousands of people would feel when after new year bailiffs and cops will start to knock on their doors. We know that as we fight for our squat, Dutch squatters will fight for their houses. We are sure that if only Dutch authorities will strike squatters, hearts and streets will ignite just like two years Copenhagen has flared! 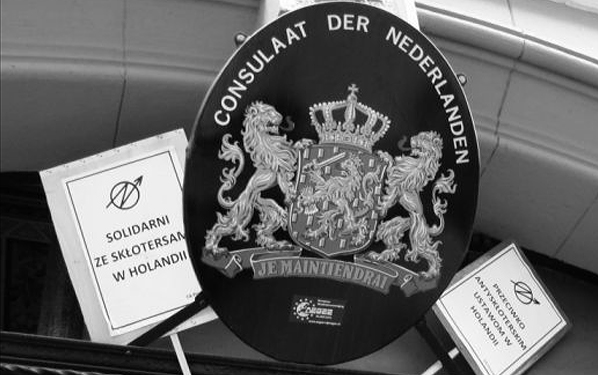